The Sycamore tree, belonging to Earth’s oldest clan of trees, Planataceae, presides regally over every landscape it graces. Look out over winter’s bone yard when the sky is this planet’s deepest blue and linger on the pristine white branches of these iconic giants.

The bark of all trees must yield to a growing trunk but the Sycamore invites the world to witness its growth as its outer layers, intractable and dusty with age, split and spall in great irregular masses. This bark, like shed skin or old beliefs or lessons learned, settles on the ground at the base of each mammoth; proof in the form of a disappearing halo, that life means growth--painful, messy, necessary. 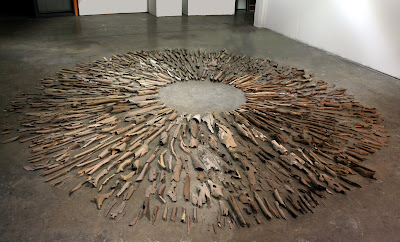 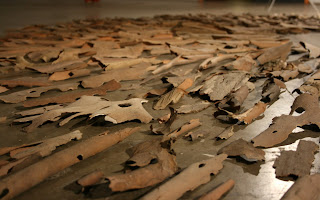 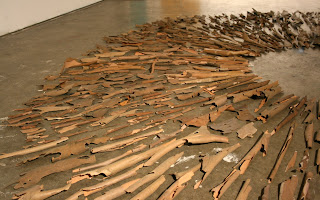 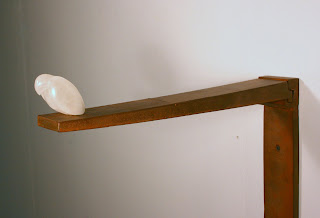 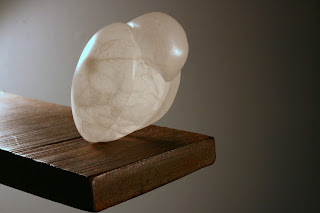 So, fly! was included in Birds of C.A.W.-An Art Exhibition curated by Helma Groot at C.S.Gallery in June, 2010

Posted by Catherine Bell Smith at 3:21 PM No comments:

Weed: a plant of no value was included in the Ohio Art League's One Night: Absolutely Absurd Exhibition in May.

Posted by Catherine Bell Smith at 12:09 AM No comments:

Forests of Dawn Redwood flourished throughout North America 50 million years ago. Before its rediscovery around 1941 in a remote region of China, metasequoia was considered extinct. Through the efforts of Harvard University, ornamental specimens survive throughout the world. But it is with dedication and determination that the stewards of North Carolina's Crescent Ridge Dawn Redwood Preserve are succeeding in birthing a magnificent, flourishing forest of these living fossils.
The cones in this series were collected over several years with permission of the owner of two wonderful specimens in Upper Arlington along my daily walk. Imagine my surprise and satisfaction when a simple curiosity led me to uncover such a profoundly moving story. There are infinite connections to find when we remain open to quiet inspiration.

Still Fertile is on exhibit in MAW's Hard Labor Show at the Sean Christopher Gallery in Columbus, Ohio through the month of May.
Look for more pieces in this series in the near future.

Dawn Redwood Series, Still Fertile
Slate, Face-cut wood, Dawn Redwood seeds
18x18x14
2010
(The face-cut wedge is provided by Dr. Raymond Hartke, tree-feller extraordinaire)
Still Fertile is dedicated to my sister, Alice Louise Hartke
Still Fertile is the flow and ebb of the creative process-like childbirth and the loss of that potential, like layers of sediment metamorphosed by great pressure, like the felling of a once vital tree.....the potential rebirth of something long thought dead.

Posted by Catherine Bell Smith at 11:42 AM No comments:

Look for my new sculpture in wood, slate and seeds
Posted by Catherine Bell Smith at 1:11 PM No comments:

Loaves and Fishes (can't you tell him we had that last night, mom?)

This piece was my contribution to the Mother Artists at Work miniature golf hole, 17th Nervous Breakdown, for A-Holes which took place March 19-21 at the Gateway Film Center. We will definitely do this again!
"Get 18 art groups to make 18 holes of miniature golf, add refreshments, invite the public. What you end up with is a unique event that mixes art and fun without all the pretentious attitudes."
Posted by Catherine Bell Smith at 2:43 PM 2 comments:

Thank you. Thank you. Thank you to Christopher A. Yates for his complimentary review of the 99th annual Spring Juried Exhibition of the Ohio Art League in the March 21, 2010 edition of the Columbus Dispatch. Eighty pieces by 54 member artists are on display at the Shot Tower Gallery of the Fort Hayes Metropolitan Education Center in Columbus, Ohio until April 27. Please check it out Monday through Friday, 9am to 5pm.
Share me

I Give You Socks

2007
Watercolor
(sizes vary)
In the mist of clouds
or the flow of water;
wind sculpted in desert
frozen in ice;
in the duff of the forest floor or
a tumble of rocks

I give you socks

Why socks?
Before the disease of mental illness gripped him in its insidious vise, Alex was a joyous boy. At his funeral family and friends gave witness to his life; not to minimize his death but to realign the bones that gave structure to his existence. As memories crowded in the years unfolded. When his mother's sister replayed a long-ago Christmas morning, we all experienced his elation upon receiving a box filled with socks. Simple pleasures. As a parting tribute to a boy so recently touching and releasing manhood, our minister suggested that we gift each other, that approaching Christmas, with socks.

This series of sixty watercolors is dedicated to my cousin's son, Alex, who died in November of 2006. Each painting, inspired by folded and jumbled heaps of socks fashioned into landscapes, was given to a member of my family as a celebration of Alex's life.

Posted by Catherine Bell Smith at 10:46 PM No comments:

This piece was selected by Ron Pizzuti for the Ohio Art League's 99th annual Spring Juried Exhibition, 2010.
The sacramental structure of Full Circle may evoke whispers of grace, sacrifice, offerings and incense or be symbolic of a dining table cherished by generations, a place of ritual and respect. But at its core Full Circle is an attempt to elevate the mundane, the over-looked, even the eradicated in our lives...and maybe atone for past sins by planting a seed considered a noxious weed by some, a promise of life for others.

In one segment of the installation the components are Milkweed seeds attached to 850 two inch paper discs soaked in seed starting fertilizer. A fine metal mesh is stitched to the dried discs with a copper wire to hold the seeds in place. The discs are embossed with a cross pattern and placed in four glass and copper vessels on a four foot round table. The altar-height table is inscribed with "vitam aeternum" and the scientific classification of Milkweed from Kingdom to species in gilded letters. Incense wafts out of a censer from my childhood Catholic Church, suspended above the table.
The other segment consists of 850 envelopes and a gilded drop box accompanied by a small sign that reads:

If you wish to fully participate please self address an envelope.
Leaving it unsealed, enclose a dollar and drop it in the box.
At the close of the exhibition you will receive one seed packet and planting instructions. 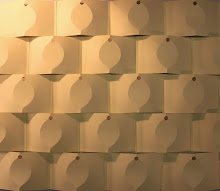